Service in El Salvador, a Pilgrimage of DOVEs

The Division of Volunteer Efforts at Seton Hall University again this year sent students, faculty members and administrators on a service trip to El Salvador. In total, 28 took the journey during spring break 2019, dividing their presence between the towns of San Miguel and Santa Tecla.

This year marked the 15th year that the Division of Volunteer Efforts (DOVE) has trekked to El Salvador, giving students the opportunity to experience a ministry of presence within the small but densely populated Central American country that is still, in some ways, recovering from the civil war that ended in 1992.

Michelle Peterson, director of DOVE, reflected "In our 15 years of travelling to El Salvador, we have seen great improvements and less poverty. It is truly gratifying to see the progress and the changes being implemented throughout the years – though there is still a great deal left to do."

Not just 'checking boxes'
Although pleased with the progress, Peterson cautioned that the DOVE service trips weren't just a means to "do a good deed, check a box and move on."

Peterson explained that the goal of these trips is for students "to be present in the lives" of the people of El Salvador and to learn and grow from that experience. In fact, although nominally a Service Trip, in many ways the journey is more akin to a pilgrimage, calling students to immerse themselves in the lives of others and with each other in community.

To that end, students take lodging for the week within the homes of local residents and spend time getting to know people who are struggling with poverty, in nursing homes, daycare facilities and orphanages.

A freshman who had never been on a Service Trip before (and was apprehensive at the prospect) noted that she was "assigned to volunteer in an orphanage in San Miguel. The entire week I worked with the happiest, smartest, kindest, and most appreciative kids I have ever met," said Carsen Essing. "From the first day I was there the kids never showed me anything but love. I was able to connect to each of them in a unique way that will stick with me for the rest of my life. While I'd like to believe I made an impact on the people in El Salvador, the real impact was the one that they made on me. They opened my eyes to see the world in a new way, to be more kind, more loving and more appreciative."

The Costs of War and Faith, the Prospect of Healing and Renewal
In the first few days of the journey in El Salvador, students visited the memorial at El Mozote, the site of the worst massacre in modern Latin American history. They also travelled to the home of Saint Oscar Romero, a Catholic priest who spoke out against poverty, social injustice, torture and assassination. Romero served as Archbishop of San Salvador up until 1980 – when he himself was assassinated while celebrating Mass in the chapel of the Hospital of Divine Providence. At the hospital, students celebrated mass within the chapel and then met and spoke with patients, many of whom were being treated for cancer.

After spending these first three days focused on the costs of war and faith along with the prospect of healing and renewal, the students were given their volunteer "assignments" and split into two groups: one to San Miguel and one to Santa Tecla.

DOVE has been visiting with families and friends in San Miguel for the last 15 years – with the exception of one, when the city was overcome by a volcano eruption and the air was heavy with smoke and ash, making it too unhealthy to visit. About to embark when the volcano first erupted, Peterson was at a loss for what to do next. As "luck" would have it, one of the students scheduled to take the service trip that year grew up in Santa Tecla, El Salvador – which was far enough from the volcano to be safe, but close enough to still be "doable."

"It all just kind of fell in to place," said Peterson. "We stayed with family and friends and got to know a whole new community. The next year, when the air in San Miguel had sufficiently recovered for us to return, we couldn't turn our backs on our new friends in Santa Tecla – we had just begun to lay the groundwork to have an impact there – so we started going to San Miguel and Santa Tecla each year." She paused, "Funny how things work out sometimes. Our mission in Santa Tecla has borne fruit in so many ways for so many people. And if it weren’t for that volcano…."

In each city, students spend time volunteering at orphanages, day care centers, nursing homes, shelters and a host of other charitable organizations. Encouraged to be "present" in the lives of others, the volunteers do not rush in with "quick fixes."

"It is important for us not to assume the needs of the community before we arrive," said Peterson. "Our goal is to go, meet people, allow the relationships and community to sink in, and also to remain aware so that we can help if a need arises."

Community
At the end of each day of service, the students gather and reconvene with the group to talk about their experiences. Often, faculty and administrators (many of whom have been coming to El Salvador each year for more than a decade) are able to provide context for students; because the groups are each accompanied and guided by a priest, these conversations often move toward the spiritual ramifications of the day's events; immersed in the lives of others, without social media and other external distractions, students tend to bond, offering each other guidance, solace and a sense of community.

"This experience is often the first intentional community outside of their families that these students have ever been a part of; we focus on the importance of having compassion for one another throughout our shared experience. Being there for others is crucial in a world where loneliness and anxiety are an epidemic among college students— and feeling a part of a community is hugely important for students."

When asked what she had learned from the trip, and what her biggest takeaway was, Annabella Pastorok, a Seton Hall student who assisted in a daycare center in Santa Tecla, didn't hesitate:

"In one word — community. In many words – a new found love of life and a renewal for a love of service," she said. "I am very active at Seton Hall in community service through Alpha Phi Omega, a co-ed community service fraternity. However, this trip reawakened for me why I started doing service in the first place – to help others. I think often we get caught up in our daily lives worrying about numbers and social norms. But going to El Salvador with DOVE reminded me what matters. Family, helping others, and giving your best energy to others – that's what matters, not the number of Instagram followers you have or the price tag on your clothes. Making meaningful connections with people and giving what you have, whether it is your energy and time or money or physical stuff – giving what you have is what matters."

To Do
Although the emphasis is upon taking part in a ministry of presence, and no "quick fixes" are offered, after returning from the trip in years past many students have started fundraising initiatives to meet various needs they saw within the communities they served. They have raised money to provide parts for a school bus that was broken down (with the parts the nuns fixed the bus up, then sold it and used the profit to buy a new and better bus); money to fund a psychological center to provide mental health counseling for aid in the aftermath of the ravages of war; a water filtration system; kitchen cabinet doors that close effectively to keep rodents out of the orphan's food; and washing machines for the nursing home, which had each day been doing the laundry of 200 residents by hand.

Although over the last 15 years the "to do" list completed by DOVE, specifically tailored to the needs of the people of El Salvador, has had a tangible impact, Peterson thinks in some ways the impact upon the students who have taken part in the program is even greater. She said, "Students often come back to tell me that the trips to El Salvador were turning points for them; that this was the start of a life formed around service to others. And as I listen to them recount their lives, I can see it’s true. And no, we don’t call these trips 'pilgrimages,' but in so many ways, that’s exactly what they turn out to be."

Annabella Pastorok's experience was, in many ways, characteristic of DOVE journeys throughout the years. "Before this trip I would not say that I was religious. I always claimed I am agnostic, but I started asking Father Dan (another one of the servant leaders on the trip) some hard-hitting questions about religion and it started a great conversation that was much needed for me. I loved this trip because religion was not forced down my throat like it has been in the past, and it made me really enjoy praying and going to mass. Since I have returned, I have been more active in the church community, but I still am not 100% sure of my beliefs and that's okay, I'll get there eventually," sad Pastorok.

Before next year's return to El Salvador, DOVE has Service Trips scheduled for Philadelphia, West Virginia and Haiti.

Service in El Salvador, a Pilgrimage of DOVEs 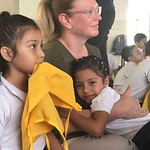 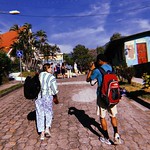 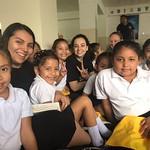 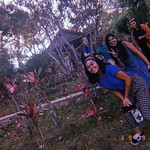 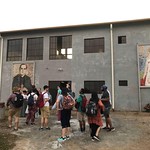 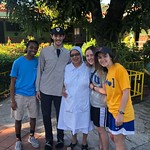 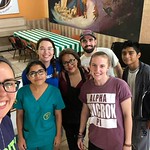 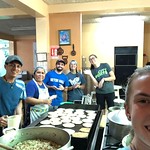 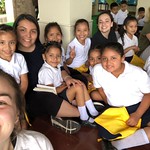 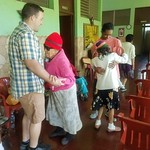 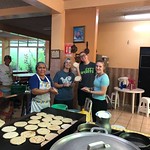 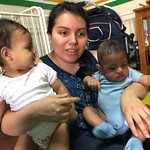